Does Anyone Recognise This Team? 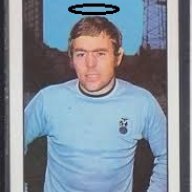 This is how we look to our opponents:

Six loan players from premier league clubs, one is valued somewhere between £3 million & £7 million, three others who are regular England young internationals.
League 1 top goal scorer.
An ex England international who many believe is still good enough for Championship football.
A defender with Champions League experience.
A midfield player recently in such good form that many feared would be targeted by Championship clubs in January and enticed away.
A goalkeeper who only a few months ago was considered one of the hottest properties in league 1, who broke the club record for clean sheets, and who was regularly scouted by higher division clubs.
A highly regarded Manager with vast experience.
A squad with strength in depth.
A team that gelled so well only a few months ago that they comfortably beat Wigan, Millwall, Gillingham, and Burton, and which led to several commentators questioning the fairness of the loan system.

Lack of confidence? would a team with so much ability suffer collectively from confidence issues from the position we were/are in? certain individuals might but the squad should be strong enough to cope with that.

Unrest in the dressing room or at management level?

Poor preparation, coaching, and/or tactics? - including whether other teams have "sussed us out"

Poor motivation within the team due to the rotation of players, players being dropped following good performances, and players retaining their place following poor performances?

Lack of cohesion due to the size of the squad?

Inability by management to instill discipline and motivation into the team?

Unsuitable balance in the team? - given the size of the squad and the benefit of starting from scratch at the start of the season this shouldn't be an issue.

The bubble has just burst for no apparent reason?